Home » When a Picture Speaks a Thousand Words, Badly…

When a Picture Speaks a Thousand Words, Badly…

Thoughts on COVID-19 and flu coinfection and mainstream media responsibility in the midst of a national emergency
Tom Rifai, MD, FACP

I opened my Apple news feed September 13th to this article. The same picture was used by multiple, if not all other, news wire services sharing the story, notably: 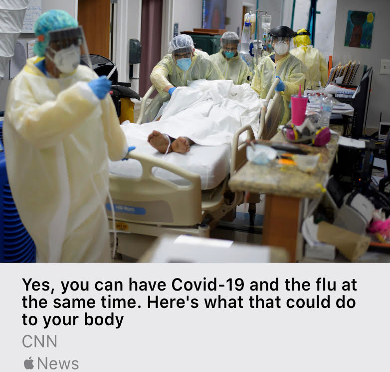 Near the top of the timeline is the gory picture of an individual on a gurney being treated with severe COVID-19 (notably, not a coinfection with flu) in an emergency situation. The title of the story circulated by CNN was “Yes, you can have COVID-19 and the flu at the same time. Here’s what that could do to your body.”

To be fair, one should remain dispassionately sober, read an entire article, then judge. After all – there are separate editors for article content, article titles and likely article “art and photography” as well. But let’s also be honest: in the end, it is all one product to us as consumers. And with the combination of a “…here’s what that could do to your body” along with a picture of someone in a deadly hospital situation — perhaps even on their death bed — invoking fear, or at least anxiety in most of us, one would expect the evidence to back the power of the picture to be as powerful.

So I delve in.  The article’s first two quotes were from two physicians. They seemed confident: “You can certainly get both the flu and Covid-19 at the same time, which could be catastrophic to your immune system,” said a family medicine physician. Then an epidemiologist added “In fact, getting infected with one can make you more vulnerable to getting sick with the other.”  These were serious claims.  And serious claims require serious data. So I started digging further. While looking carefully at every link available in the article, I saw no references to evidence of coinfection, let alone consistently dramatically worse results from a coinfection. Seemed instead of “…here’s what that could do to your body,” maybe “…and we’re not sure what it means yet” would’ve been more honest.

In fact, in this case series of three patients at high risk with COVID-19 and flu coinfection, all three ended up discharged in stable condition. While it may seem logical to lay public that two infections are always worse than one – in fact there’s general evidence, and even some specific COVID/flu data – that suggests for many, having the flu may be protective against getting COVID-19. For instance, in the best study of coinfection, which I had to find independently, of 58 people, the PHE (Public Health England) noted “longstanding evidence showed that being infected with one respiratory virus meant that people were less (emphasis added) likely to be infected with another in the short term.”  Being dispassionate and balanced (something not valued by our mainstream media these days), Dr. Yvonne Doyle, medical director of PHE, said: “There is some evidence to suggest that flu and Covid and other viruses may compete with each other [resisting co-infection]. [But] if you get both, you are in some serious trouble. And the people who are most likely to get both may be the very people that can least afford to.” Now, that is a dispassionate, balanced statement with “no gory gurney picture” required. As a board-certified internal medicine specialist, pardon me. But I’m a bit picky about precise wording as it leads to appropriate vigilance and understanding rather than reflexive, distorted fear. And we are drowning in distorted fear. For example, Americans on average believe that close to half of all COVID-19 deaths occur in people less than 55 years of age. But, in fact, well over 90% of all deaths, irrespective of co-morbidities, have occurred in those older than 55. According to the chief investment officer at Franklin Templeton Fixed Income, Sonal Desai: “The fact that a large share of the population overestimates the COVID-19 danger to the young will make a targeted public health response more difficult to agree on. We think it is also likely to delay the recovery, causing a deeper and prolonged recession.”

Notably, there was a CNN video link embedded in the article. It led to a completely separate Q&A with a CNN doctor. So to be generous, we’ll credit it as part of the CNN news story in question. The CNN doctor stated that a “fairly large” study showed “approximately 25%” of individuals with COVID-19 were coinfected with another virus (note, it was correctly not stated that to “25%” were COVID and flu). Though the Journal of the American Medical Association (JAMA) was not mentioned, it was enough information for me to find the source: an April “Research Letter” in JAMA (Journal of the American Medical Association). The article was written by three Stanford colleagues, including Dr. James Quinn, the correspondence author.

They studied 1217 specimens tested for SARS-CoV2 and other respiratory pathogens. 116 of the 1217 specimens (9.5%) were positive for SARS-CoV2. Of those 116, twenty four (i.e., 20.7%, not 25% as was mentioned in the CNN video) were positive for “1 or more additional pathogens.” But I had to wonder: if being coinfected was such a devastating issue, why was there was no discussion about whether co-infection could make the patient outcomes worse? In fact, the Stanford team’s closing statement in their study stated, “…these results suggest that routine testing for non–SARS-CoV-2 respiratory pathogens during the COVID-19 pandemic is unlikely to provide clinical benefit unless a positive result would change disease management (e.g., neuraminidase inhibitors for influenza in appropriate patients).” Note: “neuraminidase inhibitors” are drugs like oseltamivir, brand-name: Tamiflu.

Additionally, regarding Dr. Quinn’s Stanford team’s JAMA study, only ONE of the subjects (a 76 year old man) was actually co-infected with COVID and a flu virus (influenza A). Just ONE. It is quite a stretch for CNN to take the excellent data and purpose of Dr. Quinn and his colleagues’ study (which was to disprove some evidence from China that being infected with one virus in and of itself ruled out infection with another – NOT that co-infection was more deadly) and make the claims like those made directly through unsubstantiated quotes aforementioned and by implication with the “gory gurney” picture that often accompanied the article. We need our media to report science as honestly as fairly as possible, now maybe more than ever.

Lastly, current context around the CNN story is in question, with it’s provocative “gory gurney” picture and a high US level of toxic distorted fear. Currently, COVID-19 emergency room visits have dropped dramatically, now well under 2% of all ER admissions. Add that we have improved supportive care dramatically as well since the study of 58 UK coinfections from very early in the pandemic. Consistent with that is the August case series of three high-risk patients with co-infection noted above, all of whom were treated with oseltamivir (anti-flu drug) and hydroxychloroquine/azithromycin (anti-COVID combo) and ceftriaxone (“broad spectrum” antibacterial antibiotic) all survived and were “discharged in stable condition.”

Final note: to the CNN story’s credit, I fully support its call to action for all of us to get our flu shots! That is certainly one point where they expressed science very well. I’ll leave it there for this NOTeD, and let you be the judge of where, as I like so say, Reality Meets Science.