Home » Bunk, Junk, and Food: On Defending a Line

Bunk, Junk, and Food: On Defending a Line

David L. Katz, MD, MPH
LinkedIn
Food is not junk; junk is not food. Food is the native fuel of the remarkable machine that is our body. Food is the construction material for the growing bodies of children we love. Food is the source for the replenishment an adult body requires daily, to the tune of hundreds of millions of cells, and countless essential compounds from enzymes to hormones.

In this rarefied space, “junk” is inadmissible- or should be. In fact, in the sorry state of eating that reflects the ‘typical American diet,’ junk has the veritable cache of a food group all its own. A study published in 2016 indicates that well over half of all calories in the diets of American adults come from what would be commonly recognized as “junk.”  A 2021 paper indicates that for our children, junk represents over two-thirds of all calories.

Worse, junk is not merely one dysfunctional food group; it is successive waves of food groups, responsive to the vagaries of dietary fashion, fad, and the relentless quest for scapegoat and silver bullet. Give the food industry a nutrient fixation- low-fat, low-carb, low-glycemic, just-add-oat bran (remember that one?), gluten-free, lectin-free, sirtuin-free- and they accommodatingly provide us a new inventory of junk foods tweaked accordingly.

Today’s goad is a debate just published in the American Journal of Clinical Nutrition, presenting arguments for and against the utility of defining “ultra-processed foods.”  Arguing for is the principal developer of the NOVA Classification that defines degrees of processing, and establishes a standardized definition for “ultra-processed” food, a.k.a. “junk,” Prof. Carlos Monteiro. Arguing against is Prof. Arne Astrup.

I am solidly on the side of Prof. Monteiro, who in the spirit of full disclosure I should say is my friend as well as colleague. That said, my stance is born of reason, not affection.

Work by another colleague, Kevin Hall at the NIH, has shown- by randomized trial– that ultraprocessing, per se, contributes directly to overeating and weight gain, even when the foods and nutrients are otherwise matched. Dr. Hall’s work made explicit use of the operational definition of “ultra-processed” developed by Prof. Monteiro and others, and demonstrated that the designation reliably predicts behavior (of the foods, and those consuming them).

More damning still, Michael Moss has elaborated the case that this is not an unintended consequence of extreme processing; it is the very intent of it. This tale, accessible to all, has been told before to little effect. Let’s be clear about the implications: food industry giants have long known that ultraprocessing could be leveraged to hijack the human appetite center and put it into overdrive. They bank on it.

This cottage industry dispensing junk where food ought to be has long appended injury to insult in the form of cardiometabolic disease, obesity, and cancer. During the pandemic, it added more severe infection with SARS-CoV-2 to that discreditable list.

Of course, it’s true, as Dr. Astrup’s entry propounds, that not all processing is bad; some, in fact, is quite good. Cooking is processing; freezing is processing; as is the dehydration that gives us dried figs, raisins, or bagged lentils and beans ready to cook. Baking any whole grain bread or pasta is more extensive processing still.

For movements of our arms, the right to bear arms, and most other things besides, there is more to right and wrong than a summary judgment or a dichotomous choice. For most practical matters, a line must be drawn somewhere to distinguish the unacceptable from the acceptable. Prof. Monteiro has empowered us with just the standardized means of drawing that line.

Of note, simpler means of approximating that line have long been in use. Years ago, my lab developed a quite successful food label literacy program for elementary school-age children, called Nutrition Detectives. Our rudimentary ancestor of NOVA sounded like this: the shorter the ingredient list, the better. That simple rule, though imperfect, is remarkably reliable and robust in application. Give it a try.

I was privileged to speak this past week at the Culinary Institute of America’s inspiring Menus of Change conference. My two presentations- one on #NoBeefWeek, and the other on an app we are developing to quantify change in the overall environmental footprint of dietary patterns (called “DIEM”- as in carpe; and standing for dietary impacts on environmental measures)- both emphasized the timely urgency of diet for the health of people and planet alike. In that space, eating less beef and more plants is a core element, but so is eating real food, direct from nature- the antithesis of ultra-processing. The many factory steps involved in devising Frankenfoods mean water consumption, carbon emissions, and air pollution, to name just some of the liabilities. 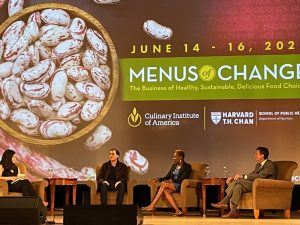 Junk is not food, and food is not junk. I stand with Carlos Monteiro and NOVA in defense of the difference, and the many differences it makes to the health of people and planet alike.