David L. Katz, MD, MPH, FACPM, FACP, FACLM
LinkedIn
Much has been made of my early contention that the coronavirus could hurt and kill people more than one way, and that we needed to do our best to interdict them all. I called the approach – that would keep those vulnerable to severe infection and the direct harms of the virus away from it, while allowing those more prone to harm through a degradation of services, goods, livelihoods, supply chains and the social determinants of health back to the world early – vertical interdiction.

The simple idea was that the risks of harm to all could be minimized by understanding the risk differentials- for deadly infection, and ideally for destitution, desperation and social disruptions- at the start.

The proposition attracted a bounty of early support, along with some opposition- the latter, though, seemingly related mostly to a dumbed-down, tweetable version of what needs to be a nuanced idea. The idea was never to trade one source of harm against the other, rush decisions, or alter course impulsively. The idea was to gather, analyze, and interpret the data necessary to minimize the range of harms- taking whatever time it would take, likely a matter of weeks.

America was abundantly forewarned about the risks of SARS-CoV-2 to the elderly and those with a burden of prior illness, notably heart disease and/or diabetes. But with years and decades of underfunding public health, a general disregard for coordinated action and proactive crisis planning, the recent dismantling of pandemic response capability, and pervasive disdain for science emanating from Washington- the United States was the furthest thing from forearmed.

The idea that we might have, elegantly, adopted vertical (i.e., risk-stratified) coronavirus interdictions from the start and thus avoided deaths, medical system overload, and societal shutdown may thus be a blend of fantasy and aspiration; this is an America that might be, but isn’t. Instead, we had the more realistic option of robust, horizontal (i.e., population-wide) interdiction in Phase 1, the reassurance of a clearly articulated plan as we distanced and isolated, and then the data-informed pivot to selective interdictions based on risk, and selective returns to the workforce and the world based on priorities in Phase 2 and beyond.

But America did neither.

To be clear, the American response to this historic crisis has been innumerable variations on the theme of inspirational. There are heartwarming stories of neighbors helping neighbors; of selflessness, generosity, and volunteerism. There has been venerable and compassionate leadership at the level of states and cities and towns. There has been kindness, resolve, and grit. Above all, of course, there is the necessary courage and professional devotion of our health care work force.   As I proceed through the on-boarding steps to join their ranks as a temporary volunteer in a beleaguered New York City hospital, I pay homage to my clinical colleagues in the fray from the start, and there until the end.

Those are the American responses- and we all have cause to celebrate them. But what of America’s response, America as in the “united” states, as in “from sea to shining sea”?

To characterize America’s Phase 1 response, only a metaphor will do: it has been a dumpster fire. A case study in dithering, delay, dumbing down, deflecting blame, self-contradiction, and prevarication. It makes fiddling while Rome burns look good in comparison. And the costs of it are, of course, measured in lives. 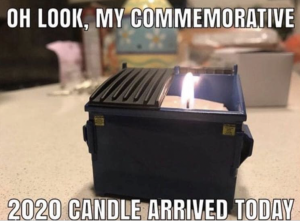 What about America’s Phase 2? Well, so far, the only suitable answer is: who knows? Its emissary tends to be a tweet-of-the-day. Not to worry, though, if you don’t like the message from somebody important. Just wait a minute and somebody important will happen along to tell you they never said that in the first place, and whose bad idea it was.

This, too, is costing lives. Even as the virus exacts its toll among those most vulnerable to it, societal collapse does likewise, working through the pathways of poverty, hunger, addiction, depression, desperation, neglect of medical concerns other than coronavirus, and violence. These are no doubt much compounded by the vacuous abyss where the comfort of a plan– or at least the reassurance of transparent planning for a plan- ought to be.

America might have done horizontal interdiction or vertical, but either way, needed to keep those most vulnerable to this pathogen away from it. But we dithered and did neither. Worse- we sent the nation’s college students and laid-off young workers home to their far-flung families, never testing any of them first to make sure we weren’t turning the country into a giant coronavirus mixing bowl. What remains to be seen now, in a period of anxious anticipation, is whether we closed the barn door after letting just a few, or many, horses of contagion run free.

Much that was theoretical only a few weeks ago is established fact now. New York hospitals are overwhelmed. The virus is taking a heavy toll among those most vulnerable to it. Domestic violence is surging. Mental health is imperiled. The harms accrue along the separate paths of ineffective control of the contagion, and indiscriminate and costly interdictions.

America can and must do better than this.

We obviously cannot, whatever might populate an ill-considered tweet, send everyone “out there” indiscriminately, by some arbitrary date. This is a thoughtless, heartless, callous absurdity- and a medical system calamity in the making.

While we must do all we can right now to slow viral spread and avoid an even greater surfeit of medical system demand and near-term casualties than we have already, we can’t just flatten the curve indefinitely, because it doesn’t save lives or prevent overrun hospitals; it just changes the dates for those catastrophes. The consensus emerging among leaders in public health both here and abroad, rarefied experts in pandemic response, and mathematical risk modelers– is that there must be something to follow “flatten the curve.”

And finally, we can’t just hunker in something like a bunker and hope for a vaccine, because the most optimistic projections are a timeline of 18 months or so, and there will be widespread disruption, devastation, and ruin to health and lives and livelihoods; to goods, services, and supply chains during that protracted span- and this cost, too, will be measured in lives- the very toll a lock-down is intended to obviate. At some point, a lock-down trades one set of lives against another.

The one way through this that does not, involves a data-informed pivot to risk-based interdiction; letting some of us go back to the world before others to restore crucial services and supply chains, to establish beachheads at the edges of normalcy and life as we knew it.

There are many variations on the theme of this basic idea in circulation now: risk-stratify the population based on detailed, American data regarding coronavirus infection and immunity; risk-stratify based on age and/or prior health; prioritize work forces and industry based on acuity of need; sequence interdictions geographically; apply interdictions both selectively and intermittently. A diverse, multidisciplinary, truly expert panel should be convened to work through them all and choose the most promising. An actual, or virtual, gathering at Camp David for several intense days of number crunching and strategizing suggests itself.

The choice should be informed by data, and subject to adjustment as more data become available. If ever there was a case to “trust, but verify” empirically, this is it. Detailed, nationally representative data are the foundation of all policy decisions and we remain far from knowing what we need to know: how many of us have the infection? How many had it, recovered, and are immune? How many in each risk group by age and factor are apt to need a hospital bed, an ICU bed, a ventilator? If this pandemic is a war, fighting it without such data means fighting it in a dense fog at night.

Any policy worth propounding must tell us something about the hope of resuming life as we formerly knew it. The “all clear” will come- grandparents will again hug their grandchildren- when those least vulnerable to severe infection have made the journey to antibodies in sequential waves; based on knowledge of the SARS-CoV-2 Ro; and carefully documented declines in viral transmission to near zero when herd immunity is reached. This is a far more proximal hope than the most optimistic progress toward a vaccine.

The reason for this concentrated effort is one thing, and one thing only: total harm minimization. Good choices were gone the moment a long-predicted pandemic for which the U.S. (and world) was woefully unprepared arrived. When the genuinely bad choices are eliminated, whatever is left, however challenging, is the best way through this.

Greatness would be great. But greatness right now is hollow rhetoric; an empty slogan; a distraction. Greatness is absurdly out of reach when basic functionality and safety so glaringly elude us. Personally, I’d settle for knowing grown-ups are in charge.

Both cry out for a plan. A thoughtful, compassionate, careful, nuanced, data-driven, expertly guided, not-reducible-to-a-tweet plan for total harm minimization. America’s response to the coronavirus pandemic waits for it. Find somebody important, and let them know.