Home » Is a Vegan Diet Inferior to Meat-Based Diets When It Comes to Bone Fractures?

Is a Vegan Diet Inferior to Meat-Based Diets When It Comes to Bone Fractures?

A recent study of the European Prospective Investigation into Cancer (EPIC), Oxford cohort, entitled “Vegetarian and vegan diets and risks of total and site-specific fractures: results from the prospective EPIC-Oxford study,” has caused another media “stir” about the shortcomings of a vegan diet! Is this proof that a vegan diet is inferior to meat-based diets when it comes to bone fractures? Let’s take a closer look

What Does the EPIC-Oxford Study Say?

In this study, dietary information was collected from almost 55,000 subjects between 1993 and 2001. Outcomes regarding fractures were taken through 2016. Various fracture types were quantified, but the most striking finding was that vegans had 2.3 times the risk of having a hip fracture compared to people who consumed meat! Folks who ate fish but not land animals, and vegetarians, who consumed dairy and eggs, also had higher rates of fractures, but not as many as vegans. Vegans also had a about 1.5 times the number of total fractures compared to “meat eaters.”

We’re focusing on hip fractures here because of the high mortality rate that comes with them, especially in elderly people, where most such fractures occur. Hip fractures usually need a major surgery and affect quality of life.

Observational studies require similar groups for a fair comparison. As such, most of the subjects in this study were caucasians from the United Kingdom, and alcohol and smoking rates were quite similar. Vegans tended to exercise more, and had higher levels of education, a potential benefit. But 27% of the meat eaters versus only 17% of vegans were in the highest socioeconomic category. Wealth plays a role in health and longevity, though data regarding fractures is not as well studied. Also, only 5.6% of vegan women were using bone preserving hormone replacement therapy (HRT), though 26.6% of meat-eating women were doing so. HRT protects women from fractures into older age, as long as it is continued. 75% of meat eating women had children, but only 34% of vegan women had children. Some studies show childbearing to be protective, though not all. Calcium intake was also lower in vegans

More importantly, the key difference seemed largely influenced by Body Mass Index (BMI), an imperfect but practical measure to evaluate weight associated risk. BMI uses a height and weight based formula (kg/m2) to determine a population or person’s weight related risk. There are better methods to assess body weight based risk, since BMI does not distinguish between a person’s muscle or fat weight, but it is a simple and easy measure that is still used commonly

Yet there is a robust relationship between bone mass (as opposed to muscle mass) and BMI. The higher one’s BMI, on average, the denser and stronger their bones. The opposite is true for those who are too thin. Bones seem to adapt to carry the additional body weight, but note that building muscle mass likely has a better effect than extra weight from body fat. Resistance exercises, like lifting weights, not only build muscle but stimulate bone to become stronger. So to be clear, we are not just recommending gaining body fat to protect bones. Keep in mind that type 2 diabetes, cancer and cardiovascular risk are elevated with higher body fat. But on the flip side, being too thin is a risk factor for certain life altering fractures, especially of the hip.

For reference, a BMI between 18.5 and 25 is considered “normal.” But BMIs under 20 are associated with increased mortality rate, as is a BMI over 25. In this study, vegans’ average BMI was 22.1, meat eaters 24.5. But 23.8% of vegans had a BMI under 20 and only 8.3% of the meat eaters did. That is a very high proportion of very slim vegans. Without getting too technical, we note that the study was “adjusted” for BMI. Statistical adjustment means that the authors tried to compare vegans and meat eaters with similar BMI levels, to remove the impact of BMI on the risk score calculated for vegans. There are many ways of doing this, and it gets pretty complex. However, from other studies, we know that the risk of hip fracture increases exponentially as BMI decreases, especially as BMI falls below 20 (see the graph below). This is likely due to the BMI and bone relationship mentioned above. Additionally, there is some padding” effect of body fat, which reduces fracture risk during a fall. When we look at the methods of adjustment, it is very likely that the study did not account for this exponential risk of hip fracture at very low BMI. 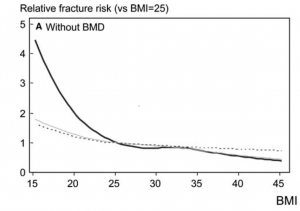 Source of above chart: 2005 Body mass index as a predictor of fracture risk – A meta-analysis

Let this be clear, this 2020 EPIC study also showed that vegans with a BMI over 22.5 did not have any increased risk of total fractures. Furthermore, vegan men did not have a statistically different fracture rate than meat eating men.

The Bottom Line: Is a Vegan Diet Inferior to Meat-based Diets When It Comes to Bone Fractures?

This study may not be the final word on vegan diet and fractures, but it does provide a warning and some guidance to improve upon our plant-based diets, especially for very thin vegan women.

Actionable items: As a plant-based physician, I strongly recommend that vegans and other folks get enough calories, protein, and calcium through healthy foods. Taking a B12 supplement is important for vegans, and often others who are very plant predominant too, since B12 is only found in foods that are from animal origins. Remember that having an exceptionally light body weight has disadvantages, just as being overweight does.

If you’re too thin, seek out guidance from a licensed registered dietitian who can guide you on healthfully gaining weight with foods that have higher calorie density but are still nutrient dense. We should all be exercising, but slimmer people definitely need extra focus on resistance exercises. Consider squats, hiking, jogging or other weight bearing exercises that build the hips bones, or find a qualified trainer that can give you a personalized routine. Play tennis or go dancing for exercise and balance training. Find routines you enjoy, and be happy with who you are. Keep in mind that shifts towards plant-centric eating patterns can reduce mortality, help the planet and ultimately reduce risk of generating new pandemics caused by our vast forms of animal agriculture.