Death by drowning is, nearly always, a matter of tragic circumstance. Death by obesity, in contrast; or poor diet quality; or cardiometabolic disease related to one or both of these; or COVID related in whole or part to all of these; or climate calamity – is mostly a matter of dissent, denial, and abdication. These are deaths by discord. Death by discord prevails.

The juxtaposition of drowning and obesity is illustrative.

Across the entire expanse of my career in medicine and public health, debates have raged about which diet is best for finding health, or more often, losing weight. Leaving aside the actual answer, the debate itself is futile to the point of absurdity.

Imagine, for instance, debating whether lifeguards at public beaches should be Catholic or Episcopalian; favor lemons or pistachios; have type A blood or everted belly buttons. Then, imagine that as long as the debates remained unresolved- we simply placed no lifeguards at the beaches at all.

Yes, of course, people would drown needlessly. But we would be debating important matters, so that would make it OK. Were we to treat drowning the way we treat obesity – this or something comparably fatuous is just what we would do.

I have long argued that we should equate obesity and drowning, hopeful we might apply to obesity the safeguards directed at drowning. There are anti-obesity analogues to lifeguards at beaches, fences around pools, parental vigilance guarding young children, and swimming lessons. Applied in the aggregate, with opportunity for personal and collective responsibility alike, such tactics would reduce obesity to the irreducible minimum- as, indeed, they generally do for drowning. 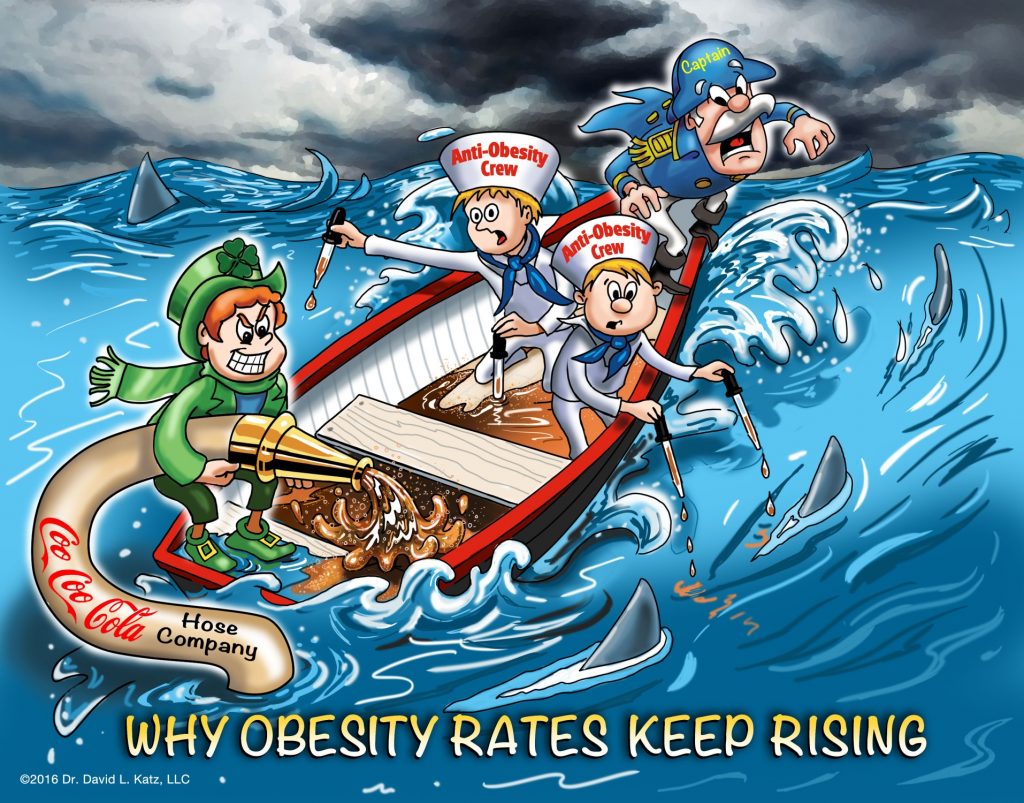 This thinking has also offered an alternative to obesity as “disease,” a stance embraced by the House of Medicine, and now perhaps inexpugnable. I support the reasons for taking this position; obesity deserves the respect that other medical conditions receive, its victims should not be blamed. But the thinking is wrong just the same. Were drowning to be catalogued as a “disease,” we would presumably be questing after drugs or procedures to fix it, rather than adjusting behavior and altering the environment to prevent it. Perhaps there is a surgical approach for gifting humans the gills evolution has denied us?

COVID is the same, a case I made recently. Climate change is perhaps the greatest example of all, given its obvious causes, dire consequences, proximal remedies, and extreme neglect.

Which leads to the irony running through the bedrock of all this. What Homo sapiens have agreed to do, culminating in this “Anthropocene” era, now threatens to undo us.

Perhaps we are at the limit of our abilities. We wring our hands about worsening rates of obesity and diabetes as we disagree about remedies, and profit from their propagation. We do the same for pandemic vagaries we are causing. Procrastination is among the least noxious of our climate crisis responses to date.

Is there hope of overcoming the many forms of menace engendered by our ingenious mischief? In my view, there is; the hope for overcoming is understanding.

Common understanding is a prelude to common cause on common ground. Accord- about when to build what our collective imaginations conceive – got us into this dire confluence of messes. Only accord- at a new and grander scale- can get us out.

Accordingly, the True Health Initiative announced this week the first recipients of the REAHL journalism award. REAHL stands for “recognizing excellence in the advancement of health literacy,” which means empowering people with understanding to overcome threats to their health- based on science, sense, and global consensus of content experts. Congratulations to the honorees who serve that mission so well- the very mission for which the True Health Initiative was founded.

We are drowning in a sea of troubles of our own devising, products all of our creative if misguided accord. Only discord consigns us to suffer this doom. We may take effective arms against this sea of troubles, and overcome, if we can muster and fulfill a shared desire for a common understanding.

David L. Katz, MD, MPH is an Internist and board-certified specialist in Preventive Medicine and Public Health. He is the Founder and President of the non-profit True Health Initiative.