Home » Are Your Food Choices Good or Evil?

Are Your Food Choices Good or Evil?

David L. Katz, MD, MPH, FACPM, FACP, FACLM
LinkedIn
Well, there is a credible tip about avoiding serpents bearing apples. But otherwise, almost certainly not. Stick with me, and we’ll get back there in a minute. 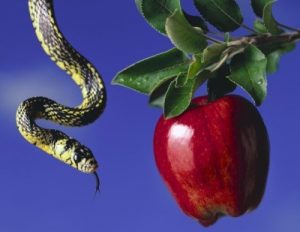 Diet in America kills hundreds of thousands prematurely every year, year after year. And since it does so generally via the intermediary of chronic diseases such as diabetes, coronary atherosclerosis, cancer, and others- it is far worse than even the stark mortality statistics convey.

Before ever robbing years from our lives, diet and the chronic diseases it so unnecessarily engenders- steal life from our years. They do so even to our children. The disease now known as Type 2 Diabetes, among the great plagues of modern epidemiology, was called “adult onset diabetes” a generation ago. Reasons for the name change are exactly as shameful, horrifying, and self-evident as your intuition suggests.

So, passions, including my own, run predictably hot on the topic, and besides- we are prone to polarize everything these days. In this post-truth era of demagoguery, civility, like expertise, is mostly dead- and with them interred, our ability to agree cordially to disagree. Now, we must migrate to opposing corners, and hurl invectives.

This state is not conducive to nuanced understanding. Rather, it spawns the hieratic ardors and extremist views formerly consigned to religion. Food has always had important ties to religion, of course; but now, food opinions are a religion all their own.

So it is that we tend to talk about nutrients and foods as “good” or “bad,” with “bad” a veritable proxy for “evil.” Fiber, for instance, is good; saturated fat widely regarded as bad.  But, of course, just as (famously) one person’s meat is another person’s poison, so, too, one diet tribe’s vice is another’s virtue. Presumably, proponents of the ketogenic diet would reverse this: saturated fat is good, fiber is bad (or, at best, overrated and superfluous).

But such impassioned views are all heat, no light. They are, in a word, wrong. They are all wrong.

Let’s start with fiber, where despite the momentary popularity of keto, there is little if any legitimate controversy. Fiber is good, right?

As noted, wrong. The dose makes the poison, always. Fiber is “good” because the typical modern diet provides far less of it than we are adapted to get, far less than all evidence suggests is optimal for our health in a wide variety of ways. Getting more of what you routinely get too little of is…good. It is good for one reason, and one reason only: it moves you from imbalance and detriment, toward balance and benefit. In all matters of health and homeostasis, balance in accord with need and physiologic adaptation is indeed good, imbalance generally bad.

What if you were eating, say, 150 grams of fiber daily- half as much again as the estimated intake of our Paleolithic forebears, and up to ten times as much as the typical American? Well, then, in all probability more fiber would be bad for you, not good- because you were already getting more than the optimal dose. At the low levels prevailing, the advantages of higher intake- related to lipid lowering, stabilizing blood sugar, sparing insulin, feeding the microbiome, and more- massively outweigh modest disadvantages. But this is almost certainly untrue at intakes over 100 grams daily. At such high levels, the advantages of fiber have passed from decisive, to diminishing returns, to dubious- while the harms start to loom large. More interference with nutrient absorption; more gastrointestinal distress; and even potential disruption of the microbiome via excessive fermentation. Over the line of balance, fiber becomes coals to Newcastle, in other words.

So, is dietary fiber good, or bad? Yes. It depends.

·     Breakfast in the Balkans

And the same for every other food or nutrient our fickle passions are inclined to sanctify or vilify. Even breakfast in America can Balkanize– with competing and concurrent claims for the benefits of eating it like a King, and skipping it outright for the sake of a protracted daily fast.

This good/evil, Manichean approach to diet has been calamitous.  When fat did not prove to be the sole root of all ills, we decided not that vilifying a whole class of macronutrient was benighted, but that it had to be carbohydrate instead. There is, perhaps, something of Newton in such religious duality: for every faction, an equal and opposing counter-faction. (That we never actually cut our fat intake in the first place is a tale for another time.)

When cutting gluten did not resolve the epidemics of obesity and diabetes and more, we crucified lectins. We have propagated massive and useless discord about saturated fat and sugar with the posture that one must be evil to the exclusion of the other. The reality appears to be that excesses of either are nearly commensurately bad, accounting for roughly identical rates of chronic disease and death. Lost in the vitriol of successive scapegoats is the abiding reality: there is more than one way to eat badly, and we Americans seem entirely devoted to exploring them all.

There are genuine subtleties in the nutritional mix, too, prone to obliteration by the bludgeonings of harsh and polarized judgments. Consider the case of omega-6 fatty acids. Some cite evidence to contend that all polyunsaturated fatty acids, of which omega-6 is one essential class, are salutary relative to prevailing calorie sources in modern diets. Others highlight the potential harms of omega-6 in disproportion to omega-3, another class of essential fatty acid, and in excess of our native adaptations. What should be a scholarly debate inevitably, in this social media age, invites the public at large to choose a side, and gravitate to the extremes of fervor.

But in a world of less radical passions, we might pause to ask: why can’t both be true?

Omega-6 fats from simple, minimally processed sources- nuts, seeds, grains, and oils derived from them- in seemingly any realistic proportions, offer apparent advantages when displacing the customary junk from the generally deplorable, standard American diet (e.g., added sugar, highly refined carbohydrate, processed meats, high concentrations of sodium, ultraprocessed foods). Once those bigger problems of overall dietary pattern have been addressed, however, then balance among unsaturated fats seemingly emerges as a significant health consideration in its own right. Excessive omega-6, at the least, inhibits the body’s ability to manufacture the important long-chain omega-3 fat, DHA, from its short-chain precursor. DHA is concentrated in the brain, and thus has implications for everything from cognition, to mood. But this effect is small relative to the impact of general, overall dietary pattern and quality- and is thus substantially invisible in the currently prevailing state of nutritional epidemiology in America. Invisible, too, is the common ground where the perspectives on omega-6 might meld, lost outside the blinkers of competing fealties.

Another, singularly important item taking on a religious patina- rooted in ideology and misplaced faith in one-size-fits-all research methods- is the contention that we reliably know nothing at all about nutrition and human health. This is every bit as preposterous as it appears. Of course we know that in general water is better for us than Coca Cola; pinto beans better for us than jellybeans. Of course we know that tree nuts offer potential health benefits, while donuts- not so much.

Much is made of our inability to assign specific blame or credit to a particular cube of sugar, strip of bacon, or blueberry. But failed attribution of quantified credit or blame to some isolated food or nutrient is no more inexplicable than our inability to attribute emphysema or lung cancer to daily cigarette #17, or #26, in 3-pack-a-day smokers.

It is the overall dietary pattern that matters, just as it is the overall smoking pattern. Had we opted to study tobacco as we too often study diet (i.e., what is the isolated outcome effect of daily cigarette #17? #26? Which is worse? Which is better?)- we would still be mired in doubt and debate about the net harms of tobacco. How calamitously tragic that would be for all but the infamous Merchants of such doubt. The comparable impasse about diet is comparably calamitous, comparably tragic, and altogether as unnecessary. For all of its many potencies, science cannot generate good answers to senseless questions. The methods of science offer us the might of a freight train; still, sense must lay the tracks.

There is, though, an important proviso to all of this. Cruelty and abuse of our fellow creatures, is, indeed, evil. Devastation of this planet’s greatest native treasure, biodiversity, is bad. Decimation of life, nature, and such marvels as the Amazon rainforest are vile, if anything is. Eating up the food our children will need, ravaging the soil in which the roots of all future hope reside, and drying out the aquifers all future thirst will require- is despicable.

Where our choices and indulgences extend their effects beyond the boundaries of our own skin, assaulting others with skin in the same game- talk of good, and evil, begins to make a lot more sense. And yes, food does pertain, and potently, to all of this.

So while foods and nutrients are not good or evil, the effects of dietary patterns at the scale of 8 billion or more hungry Homo sapiens might readily do one or the other. That deserves our attention, and our unity. Through the combined lenses of human health effects, environmental impact and sustainability, and the ethical treatment of other life- our dietary options are much attenuated. We are fortunate that the best answers to each of these are, if not identical, closely related variants on the common theme of “food, not too much, mostly plants.”

But unity of action based on what we do know is forestalled by competing passions, by Manichaeism, by ideology where the common beacon of epidemiology ought to be. Food is not good or evil. But there is much devilry in the competing claims of what we do and don’t know about it- propagated in diatribe, redounding to the good of none. Until we separate church and plate, we will, as a matter of routine, keep eating ourselves to death while looking for some food, some nutrient, and someone- to blame.

This article first appeared on LinkedIn.

Dr. David L. Katz is co-author with Mark Bittman of How to Eat: All Your Food and Diet Questions Answers, just released and in bookstores everywhere. 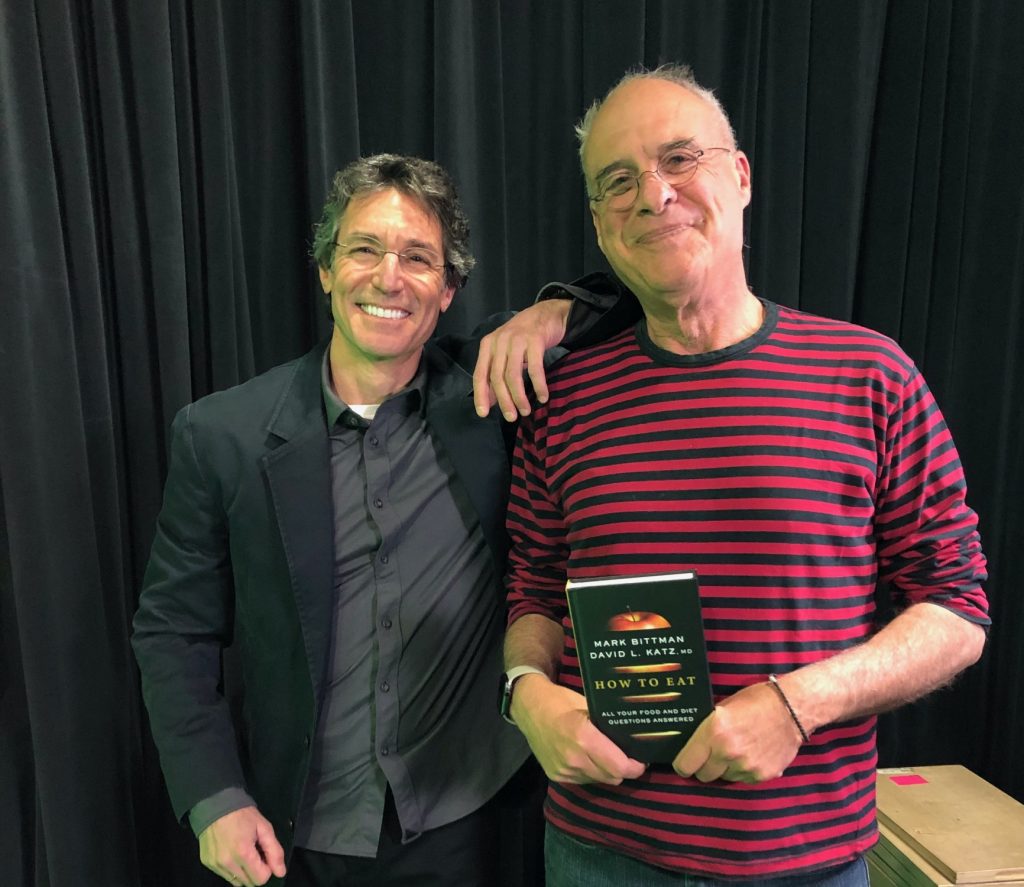