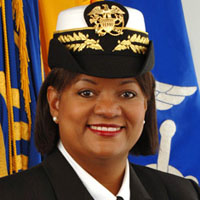 Regina M. Benjamin, M.D., M.B.A., was appointed by President Barack Obama as the 18th United States Surgeon General in July, 2009 and served a four-year term. Dr. Benjamin also oversaw the operational command of 6,700 uniformed public health officers who serve in locations around the world to promote, and protect the health of the American People. Dr. Benjamin served simultaneously as Surgeon General and as the first chair of the National Prevention, Health Promotion, and Public Health Council (National Prevention Council) ─ 17 cabinet-level Federal agencies that developed the road map for the Nation’s health – The National Prevention Strategy.

She has a B.S. in chemistry from Xavier University of Louisiana, an M.D. degree from the University of Alabama at Birmingham and an M.B.A. from Tulane University. She attended Morehouse School of Medicine and completed her family medicine residency in Macon, Georgia.  Dr. Benjamin is the recipient of 22 honorary degrees. She is former associate dean for Rural Health at the University of South Alabama College of Medicine in Mobile and past chair of the Federation of State Medical Boards of the United States. During her tenure as Surgeon General, Dr. Regina Benjamin was ranked as one of the “100 Most Trusted People in America” (Reader’s Digest May, 2013).