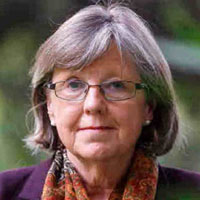 Georgina Mace is Professor of Biodiversity and Ecosystems and Director of the UCL Centre for Biodiversity and Environment Research (CBER). Her research interests are in measuring the trends and consequences of biodiversity loss and ecosystem change. She led the development of criteria for listing species on IUCN’s Red List of threatened species, and was a coordinating lead author for biodiversity in the Millennium Ecosystem Assessment (2000-2005). Recently she has worked on the UK National Ecosystem Assessment (2009-2011), was a co-investigator on the NERC Valuing Nature Network (2011-2013), Associate Director of the Ecosystem Services for Poverty Alleviation Programme (2010-2014), and member of the Natural Capital Committee (2012-2015). She was elected FRS in 2002, and was the 2007 winner of the international Cosmos prize. She was a Trustee of the Natural History Museum (2004-2012), President of the Society for Conservation Biology (2007-2009), and President of the British Ecological Society (2011-2013). Currently she is a NERC Council member, a member of the Council of the Royal Society, and Trustee of WWF-UK.