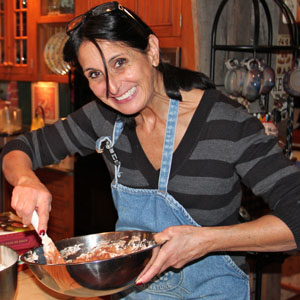 Catherine (Sananès) Katz, PhD is a culinary expert and founder of Cuisinicity.com, a healthy cooking website where good food and good health come together in a way that is actually feasible for today’s busy families.

Catherine received her BA (psychology) from the University of California, Berkeley ’81, and her PhD in neuroscience from Princeton University ’87. She went on to complete post-doctoral training at Yale University.

Born in North Africa and raised in southern France, Catherine learned Mediterranean French cooking from her mother and aunt. After marrying nutrition expert and THI founder, Dr. David L. Katz, Catherine applied her scientific acumen to the systematic reconciliation of great cuisine and great nutritional quality, recipe by recipe, using simple wholesome ingredients with a plant-based emphasis. The result is an approach to optimal eating she and David refer to as “loving food that loves you back,” an approach on which their five children have been raised.

Catherine has generated hundreds of “loving food that loves you back” recipes, meeting the highest nutrition standards and the demands of discerning palates in adults and children alike. Her recipes have been widely featured in national media, and appear in many blogs geared toward busy health-conscious mothers. Her recipes have also been incorporated in the menu offerings of the University of Massachussetts at Amherst and Yale University dining.

Along with her husband, Catherine is the co-creator of the Nutrition Detectives™ food label literacy program now in use by thousands of schools all over the world.  She has collaborated in the production of other health promotion programming, namely the Unjunk Yourself® music video, Yale Food Day 2015; “Toward a greener diet”, in collaboration with the Center for Science in the Public Interest, and the Highway To Health Festival 2015 in New York, in collaboration with Healthcorps.