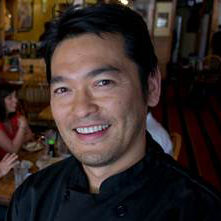 Bun Lai is a James Beard Foundation nominated chef who is on the vanguard of the worldwide sustainable food movement. His family restaurant, Miya’s, is the first sustainable sushi restaurant in the world.

Bun has appeared on ABC, NBC, FOX, Food Network, NHK (Japan Broadcasting Corp.) and NTV (Nippon Television) and has been featured in Time, Prevention, National Geographic, Food and Wine, Saveur, Eating Well, The New York Times, The New Yorker, The Atlantic and Outside, as well as numerous other national and international media. He is a speaker and author who has been published in Scientific American Magazine.

Bun is the former cooking and nutrition Director at New Haven Farms, a pioneering nonprofit organization that addresses the health and development of the low-income diabetics through urban agriculture. He is also a Director of an internship/mentorship program created in collaboration with Common Ground High School and the Yale Psychiatry Wellness Initiative.